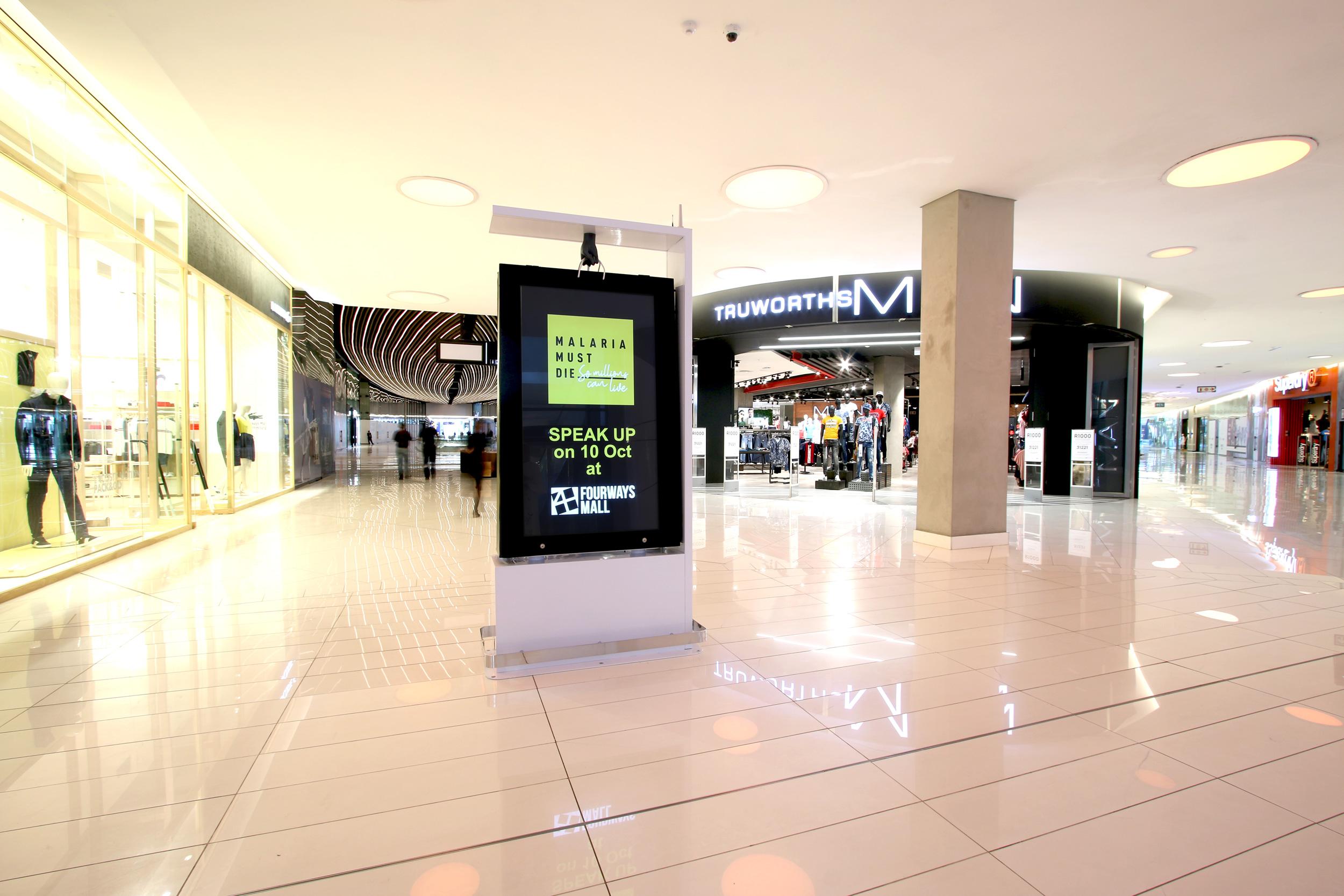 The campaign ‘Malaria Must Die, So Millions Can live’, was launched this week in South Africa by Primedia Outdoor using digital out-of-home (DOOH) advertising activations to inspire people to join the world’s first voice petition to end malaria. The campaign which began earlier this year championed by David Beckham launched the world’s first voice petition to end malaria. In a short film, David appears to speak nine languages using emerging AI (artificial intelligence) video synthesis technology. People around the world were invited to speak up by visiting malariamustdie.com and recording the message ‘Malaria Must Die’.

The digital out-of-home campaign will now reach Europe, Africa and the Middle-East. All of the messages collected via the voice petition will be presented to top decision makers and world leaders at the Global Fund’s Sixth Replenishment Conference in Lyon (France) in a powerful short film. The Global Fund is dedicated to ending the world’s three biggest preventable killer diseases – AIDS, Tuberculosis and Malaria and is seeking to raise at least US$14 billion for the next three years from donor governments, implementing countries and the private sector, to help save 16 million lives.

Developed pro-bono by Facebook and Powster (an award winning interactive and production company), the filter is available on Facebook and Instagram. The filter simulates a swarm of deadly mosquitoes around the user’s head which only dissipate when ‘Malaria Must Die’ is spoken, reinforcing the message that malaria declines with increased action but can return with a vengeance when the fight is deprioritised.

In South Africa, leading out-of-home media owner, Primedia Outdoor is engaging mall shoppers with a Quividi-powered life-size DOOH version of the malaria AR filter, that can be experienced in Fourways Mall, Johannesburg. At the same time, Primedia Outdoors’ roadside LED network will display an advert of David Beckham surrounded by thousands of mosquitoes, inviting the audience to join the voice petition and help end Malaria.

Abi Smith, Creative Director at Powster says: “We’re extremely proud to have the opportunity to support such an important campaign. Working with Spark AR and Quividi provides a fantastic platform for us to innovate and share the message to ‘Speak Up’ with audiences on and offline in a way that is both playful and meaningful. It’s exciting to employ our technical expertise to create a really cutting-edge experience that will capture attention and help amplify the Malaria Must Die message around the world.”

Ke-Quang Nguyen-Phuc, CEO at Quividi says: “We feel privileged to use our Digital Out-of-Home audience intelligence platform for such a great cause. Leveraging Powster’s striking face responsive experience, our technology can add its voice to this powerful collective to end malaria. We are also grateful to all our OOH and technology partners that provided pro-bono Digital Out-of-Home advertising space and interactive digital screen for this fantastic initiative.”

Jorja Wilkins, Marketing and Marketing Services Executive of Primedia Outdoor says: “It is a great privilege to have been selected as the media partner for the ‘Malaria Must Die’ campaign in South Africa, and to be part of such a meaningful global initiative. Our mall and roadside digital platforms offer key podiums for this important cause in reaching mass audiences and ensures awareness and engagement for the campaign.”

James Whiting, CEO of Malaria No More UK says: “It’s important to find new ways to amplify the voices of those affected by malaria and give everyone the opportunity to speak out and call for more action to end this preventable disease. Malaria is the world’s oldest and deadliest disease and is still claiming the life of a child every two minutes. We want to grab the attention of world leaders and to demonstrate that people around the world have demanded an end to malaria in their generation.” In November 2017, the WHO World Malaria Report revealed that for the first time in a decade cases and deaths were beginning to increase and progress fighting the disease was stalling. The global malaria community came together and launched the Malaria Must Die campaign, fronted by David Beckham, in February 2018. On 8 September 2019, the Lancet Commission on malaria eradication published a new report, authored by 41 of the world’s leading malariologists, biomedical scientists, economists, and health policy experts, that said that malaria can and should be eradicated within a generation. James Whiting continues: “The ‘Malaria Must Die, So Millions Can Live’ campaign is part of the global drive to see progress accelerate. With the right leadership, tools and funding, we can be the generation that ends this killer disease for good”.

About Malaria Must Die, So Millions Can Live: Malaria Must Die is a global campaign backed by a wide coalition of organisations and celebrities who are calling upon leaders to prioritise the fight against malaria, or risk undoing decades of unprecedented progress. It aims to inspire support and build a strong mandate for bold political action to end malaria for good. Malaria No More UK is convening the campaign on behalf of the global malaria community.

The Voice Petition is the call to action for the next phase of the Malaria Must Die campaign, launched by Malaria No More UK in February 2018 in the run up to the London Malaria Summit held alongside the Commonwealth Heads of Government Meeting (CHOGM) in April 2018. The Malaria Summit featured commitments worth over $4.1bn to fight malaria and was followed by a historic CHOGM commitment to halve malaria across the Commonwealth by 2023.

About the AR Filter: The bespoke AR filter is available on Facebook and Instagram in the camera feature of the app and can also be found at stopthe.buzz/ig and stopthe.buzz/fb
The filter was developed, pro-bono, by interactive and production company, Powster in partnership with Facebook.

David Beckham is a founding member of Malaria No More UK Leadership Council and a committed champion in the fight against malaria with over a decade of support for Malaria No More UK. In his long-term role as a UNICEF Goodwill Ambassador he has seen the impact of malaria on people’s lives in countries such as Sierra Leone.

About Quividi: Quividi is the World #1 audience & campaign intelligence platform for DOOH & Digital Signage, with 600+ customers analyzing billions of shoppers every month, across tens of thousands of screens.

Brands use Quividi to turn DOOH & Digital Signage into a powerful medium, boosting engagement, traffic and sales. With our platform, marketers have the unique ability to test, measure, optimize and deliver data-driven contextualized content to best engage and convert audiences, while respecting privacy.